Regarding the roadblocks Sack has hit, Klaus said: "I don't see why they wouldn't be (interested) if it's a good idea. "The right tool in the right place is generally welcome." Nonetheless, over the past four years, the pair has been trying to no avail to pique interest among fire departments, hoping to do tests and prove the capabilities of their machines. "We just want to talk to people," said Mortimer, who oversees Velocity's public relations. "Do the fire chiefs around California know about us? They're tired of hearing about us."
In addition to the lumbering, heavy-duty water trucks, the other vehicles can lay down a coating of the same fire retardant dropped from airplanes. 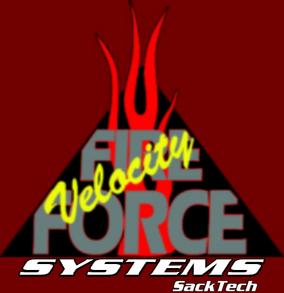 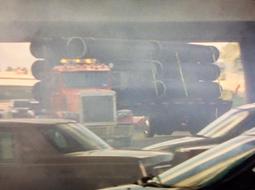 ​George Sack will be the first to tell you his fire trucks are nothing revolutionary.

They're just another tool in battling blazes, he'll say. But they're apparently a tool with some firepower. In the space of about a minute, one of the Agua Dulce resident's trucks can blast out 4,000 gallons of water, shooting a geyser-like stream up to 300 feet, or out nozzles on both sides of the truck. By comparison, twin-engine SuperScooper planes used to combat wildfires can drop 1,600 gallons of water in one pass and four-engine air tanker used to fight the Station Fire can dump about 7,000 gallons at a time.​

An All Natural Fire Fighting Process!

However, Sack's inventions haven't been tested by fire department officials for effectiveness or reliability. Sack and his partner Bill Mortimer have approached chiefs throughout the Los Angeles County Fire Department, plus officials with the California Department of Forestry and Fire Protection, trying to drum up interest for contracting their services, but to no avail. Sack is no stranger to working with fire. Over the last several decades, he's worked as a stuntman, specializing in jackknifing big-rig trucks and driving flaming vehicles in films including "Frequency" and "Transformers 2." He also heads up Hollywood Fires, Inc., providing water trucks for film productions that involve fire prevention.

Over the last six years, he said he has invested $2 million in developing his fleet of nearly 17 trucks, under the name Velocity Fire Force Systems.  But he said he's gotten nowhere in raising the interest of fire officials. At least one local fire official had no explanation for the apparent wall Sack has hit. The idea of putting out retardant from a ground vehicle versus from the air "makes sense," said Luke Klaus, assistant fire chief for Division 3 of the Los Angeles County Fire Department. "I can't say I know of anybody that does it," he said. He said the department's equipment development committee oversees the technology used to combat fires. 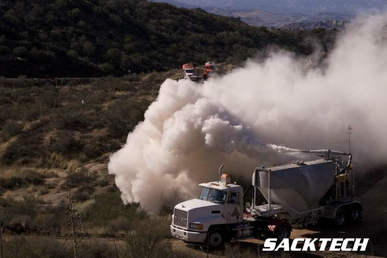 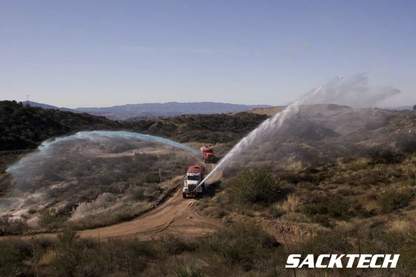 The trucks can put out 15 tons of flame retardant - commonly known as PhosChek - or ABC, the same foamy material found in fire extinguishers. It costs about $100,000 to build one of the trucks, which puts out 15 tons - 30,000 pounds - of flame retardant.  Four days before the gargantuan Station Fire threatened Mt. Wilson, Sack said, he contacted fire officials and offered his services. "We expected not to get a call back," he said. "We weren't disappointed."

Update: George and SACKTECH are using, Zeolite from, Zeo-Tech. Zeolite is an all natural fire retardant mineral.

Over 50 Years of service to the Motion Picture Industry